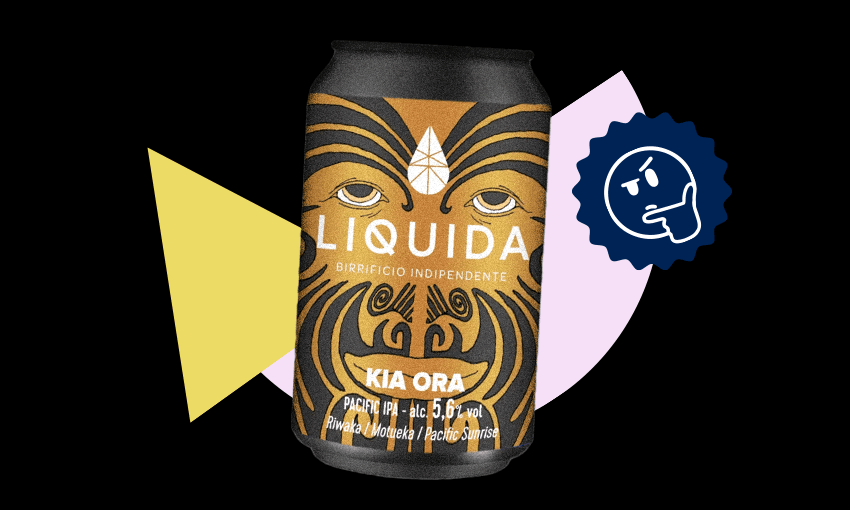 Why are foreign breweries always so wrong about Maori?

The international beer industry is passionate about applying Maori words and images to its products. He also remains stubbornly ignorant of their meaning.

“This is another stop in New Zealand for you to experience the New Zealand hop explosion,” boasts their website, going on to say that the beer combines a trio of New Zealand-grown hops – Riwaka, Motueka and Pacific Sunrise – resulting in a 5.6% Pacific IPA with citrus and tropical fruit notes.

And all contained in a box representing a head bearing the unmistakable curved lines and koru of tā moko.

For one thing, the relationship between Māori and alcohol is tenuous – perhaps best exemplified by the most common word for alcohol in te reo Māori: waipiro, which translates to stinky water. Maori did not have alcohol before the arrival of Europeans and its proliferation, as it is often blamed for helping to fuel negative stereotypes about Maori as well as many social problems that did not exist before colonization .

Then there’s the questionable nature of the specific words and images used on the box. The head, tā moko and the expression kia ora (which, although commonly used in place of the word “hello” translates more literally to “be healthy”), each have a special meaning within the te ao Maori.

As for the name, “calling a beer kia ora has a number of negative connotations for te reo Māori,” says Maori cultural adviser Karaitiana Taiuru (Ngāi Tahu, Ngāti Kahungunu, Ngāti Rārua). “Mistaking something that refers to health for a beer is definitely inappropriate,” he adds.

Perhaps most glaring is that the head and tā moko are considered particularly tapu in te ao Māori and are respectively linked to specific tikanga around their handling – particular things you should and shouldn’t do when they are involved. Therefore, neither should be tied in this explicit way to food or drink, especially alcohol, Taiuru says.

Beer writer Denise Garland adds that “it’s like the beer can itself is the head of a Maori person and so even to manipulate that and pull it off the shelf, it’s so incredibly disrespectful. I can’t imagine anyone would ever do this if they really understood how offensive it is.

This is not the story of a can of beer. Because when it comes to the use of Maori words and design in overseas beer marketing, this is not an isolated example. In fact, the craft beer world is full of pump clips, bottle and can labels emblazoned with Maori words, designs and caricatures.

Type ‘Māori’ into the search bar on beer tracking platform Untappd and you’ll be faced with an astonishing number of results: 11,407 beers with the word included in their name at the time of writing. Meanwhile, the word “aroha” returns almost 2,000 beers and “haka” 17,000. While these figures also include home brewers, they do not include all appropriation of Maori images and designs, which which is much harder to find. In 2019, Garland wrote about the prevalence British brewers describing their beers made with New Zealand hops as Maori pale ale. “The use of the word Māori to describe a style of beer in the UK is not only potentially confusing to consumers – given that there is no such thing as Maori beer – it is also offensive,” he said. -she writes.

So why are Maori words and designs so prevalent in overseas beer marketing?

Images and words that refer to Maori are naturally considered New Zealand signifiers. However, “while there is a broad understanding abroad that Maori are the indigenous people of New Zealand, there is little understanding of how important this is, in terms of identity,” she says. . In this way, brewers are likely making these marketing decisions with misguided rather than explicitly malicious intentions.

In response to this lack of understanding, four years ago Taiuru and Garland, alongside beer expert Steph Coutts, published a online guide aimed at brewers in Aotearoa and overseas to help counter cultural appropriation within the industry. Unfortunately, in a fragmented industry, it has been difficult to spread this advice.

Since most of these culturally inappropriate beers are the result of selling New Zealand hops overseas, Garland thinks local hop suppliers could play a role in this process by helping to educate buyers. Taiuru agrees and says, “It would be nice if they just had the guidelines and warned foreign brewers against appropriation.”

A spokesperson for Nelson-based hop supplier Hop Revolution said it was aware of the guide written by Garland and Taiuru. And while they don’t currently share the guidelines with their overseas buyers, “we are educating our customers about the inappropriate use of Maori culture on their products and promotions.” They also explained in an email that while they always request approval of promotional artwork from their distributors and brewing customers to help mitigate risk, these requests are not always honored.

“Sharing a specific guideline as a condition of sale will not ensure full compliance because hops [are] often resold and traded between brewers. It’s hard to control [other] contractually the marketing and promotional materials of the entities,” they added. “We may have to work on another solution. We are open to suggestions and happy to collaborate to better educate our customers.

While our local beer industry has a much better understanding of cultural appropriation, there are examples of breweries in Aotearoa getting it wrong too. In 2016, New Zealand’s Birkenhead Brewing Company made a similar mistake, depicting tūpuna Hinemoa and Tūtānekai on their beer labels.

With that in mind, Garland says the responsibility must be borne by the local industry as a whole when it comes to responding to offensive branding. “It’s really important that we do something about this within our own community, because we’re not immune to making these mistakes ourselves.”

The concept of cultural appropriation is the subject of intense criticism, debate and, often, prying eyes. Probably because it’s a term that has been chronically misapplied and simplified. There are, of course, instances where elements of a culture are truly embraced or celebrated by those outside it, but that doesn’t deny that in other instances the opposite is true. “I believe people should use our culture to celebrate, and they should use it for branding purposes,” Tauira says. “But in doing so they should actually consult with Maori to make sure it’s not offensive.”

Whatever the intent, the consequences of repurposing fragments of a culture work incorrectly to dilute complex and interconnected practices, identities, and beliefs in, say, a marketing strategy for a can of craft beer. .