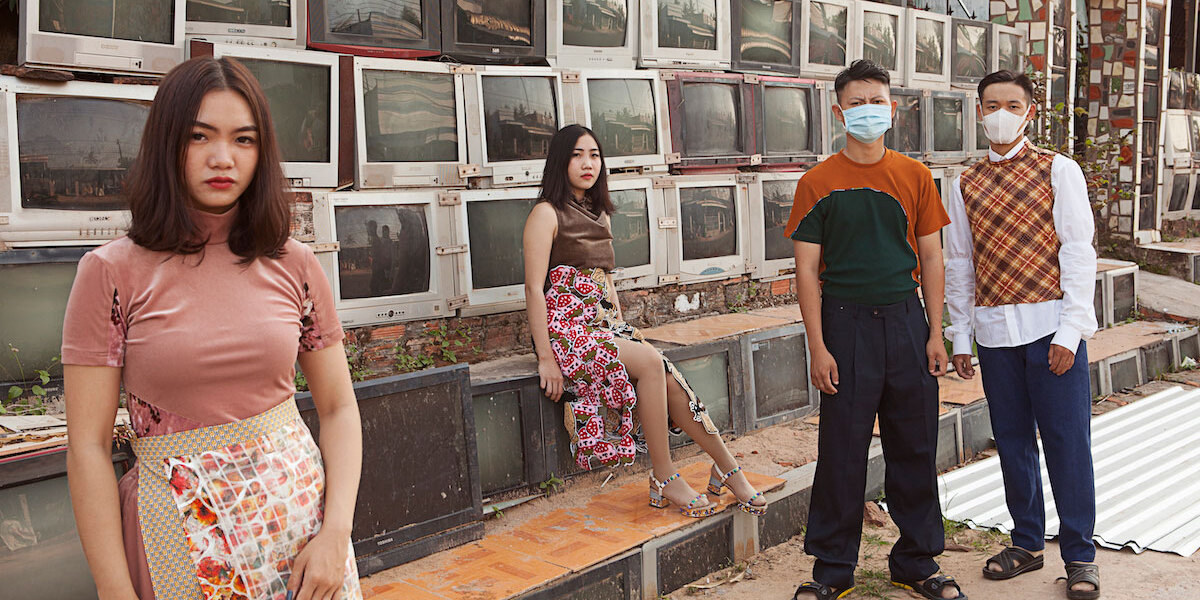 “REFASHIONING” at the Japan Society in New York brings together two emerging fashion brands – Tokyo’s Wataru Tominaga and downtown Manhattan’s CFGNY – as Asian American cultural policy reaches a critical juncture. Reported spikes in violence against Asians have tapped into a growing source of anger, tensions that often abate with commercial ventures like fashion, art and lifestyle. It is a seductive and scintillating dream: that “reshaping” one’s personal choices can bring about a radical change comparable to a total political reorganization. This context poses a major question for creators here: what are the challenges of Asian and Asian diasporic cultural production within an industry that is inherently politically compromised?

The exhibition opens with a video from the CFGNY that tackles this problem. The collective’s nickname is an abbreviation of “Concept Foreign Garments New York”, which includes artists Daniel Chew, Tin Nguyen, Kirsten Kilponen and Ten Izu. Each narrates in turn while an endoscope camera pans over yellowed paper taken from the Japan Society binders. The pompous language of its content has aged badly. Chew reads in a travel brochure reassuring Westerners keen to “get into the real inside” of Japan and China that there will be clean hotels comparable to those in Europe. The camera pans over the word “Oriental” and elegant high-society lunch menus, eventually winding through what turns out to be CFGNY’s own hollow sculptural forms seen in “Refashioning”: strikingly bodily surfaces and bumps filled with pustules or villus-like protrusions. The result is a colonoscopic investigation of how the Japaneseness of the institution is produced through the distorting prism of foreign diplomacy; its holdings evoke an idea of ​​the country acceptable to distinguished connoisseurs, socialites, politicians, and philanthropists (John D. Rockefeller was president of the Society from 1952 to 1977). CFGNY’s video, as critical as it may be of identity as an elitist and nationalist investment, seems to abandon the desire for authenticity altogether. Rather than correcting erroneous representations or pernicious stereotypes, the artists rather work to dissolve any idea of ​​national, regional or cultural essence. As scholar Takeo Rivera has written, “Asian American subjectivity becomes itself through its own loss.” His insight matches the collective’s own unstable ideas of being “vaguely Asian”, a phrase they’ve adopted to describe the band’s ethos.

Nearby, a mannequin wears what, in my opinion, remains, since it debuted on a twisty cardboard runway at 47 Canal in 2018, CFGNY’s strongest design. Title New Fashion II, the sheer mesh number cradles near a stuffed animal-infused midsection in a bulbous, tumescent chamber loosely inspired by aesthetic theories from the iconic 1997 show “lumps and bumps” by Sianne Ngai and Comme des Garçons. (A version was donned by artist Christine Sun Kim for the opening reception of the 2019 Whitney Biennial.) While many designers attempt to revise the human body into a conformist ideal – former European fashion houses such as Christian Dior or Fendi, owned by parent company LVMH, come to mind as brands that present the same gendered collections year after year, all with cinched waists and elongated silhouettes – CFGNY sutures in place which already exists but seems indescribable: psychic projections of the cute and the grotesque onto Asian flesh.

For “Refashioning”, CFGNY has set up a room where fragments of neighboring buildings in Midtown are reconstituted in cardboard. Delicately, even lovingly rendered in this humble material, the ornamental trappings of “the West” – Gothic cornices, neoclassical columns – become fragile and penetrable. This ephemeral architecture contains a dining room with banquet tables and chairs that also serve as bases for a series of porcelain sculptures born from the assembly of various everyday objects. In an embrace of chance, absurdity and humour, a work is called Consolidated in Relation, Blue (1 basket, 1 sports bra, 2 bottles, 2 cups), 2022. In addition to providing in-between commentary that might seem a little on the nose, these charming inoculations reflect CFGNY’s priority on people-to-people relationships. Daniel Chew described the collective as an effort to bring together like-minded Asian designers navigating a predominantly white industry that would otherwise have “competed them to be a [racial] token.”

Like the designers at CFGNY, Wataru Tominaga began his career in the fine arts and saw fashion as a way to expand his practice. But the Japanese-born and based artist came to approach the concept of “Asia” differently and experienced otherness in ways distinct from the racial dynamics of the United States, after studying in London and working with European brands like Marimekko and John Galliano. . During the panel, he wondered if his work collided with identity. “I never really felt, ‘I’m Asian,'” he said. Given Tominaga’s perspective, the designers might initially feel incompatible, and yet Tominaga aligns with CFGNY’s plan to sabotage Asia’s monolithic ideas in the West. Here and elsewhere, designers’ work eschews the East-West clichés that often accompany fashion exhibitions (as in the Metropolitan Museum of Art’s Orientalist extravaganza “China: Through the Looking Glass”); CFGNY’s video work and installation exposes the vectors of power that make this relationship difficult.

Additionally, Tomonaga’s work rebels against the restrained minimalism that still dominates American perceptions of Japanese high culture. He indulges in the showy and tacky in a way that feels liberating or delinquent, layering – for example – stripes on a plaid over a diamond: a kaleidoscopic punch for the eyes. His designs often take inspiration from vintage pieces, using screen-printed and tie-dye t-shirts to construct dresses that give the wearer the effect of having collided with a clothes rack. They hang like specimens for scientific study, suspended in industrial metal frames designed by Brooklyn-based duo Chen Chen & Kai Williams. Their ghostly shapes are interspersed with rectangular textile fragments stretched with metal clips, as animal skins would be when tanning leather. These flattened fragments display the painterly nature of the artist’s textile experiments, their vibrant strands arranged in patterns or left loose like doodles before being pressed into place with heat.

Both brands – if you can call them that – seek imperfection against the antiseptic neoliberal aesthetic that makes contemporary living so empty. Their work evokes the butcher’s apron, the bulky schoolboy, the lovers in a photo booth, the cheap wares of the street vendor, and even the dapper dandy: a dissonant whole that does not easily conform to the ascending visual culture of the ” racial bourgeoisie” that scholars like Mari Matsuda have warned Asian Americans are at risk of becoming.

“Do people of Asian descent in this country want to be Asian Americans?” Critic Andrea Long Chu recently asked this provocative question for a New York magazine issue on the theme “At Home in Asian America”. At a time when racial identity in the popular imagination is so often readable through injury and death, it’s hard to imagine answering this question with enthusiasm. However, CFGNY and Tominaga confront identity as a fabric to be cut and renewed, their garments offering a welcome exuberance and lightness amid the serious faux austerity that has become fashionable in response to our current moment.

Chu’s question is about belonging, but also about desire. Do people of Asian descent in this country want? Why is this Asian American enjoyment and the libido, like the joy of looking at oneself in the mirror, appear as untouchable subjects, even in contradiction with a political project such as that of concretizing Asian America? Researcher and writer Saidiya Hartman names “countercathexis in the body as a site of pleasure and the articulation of needs and desires” as an essential component of black liberation. Asians and Asian Americans who strive to overthrow racial capitalism may therefore also find bodily desire in crisis. The creations of Tominaga and CFGNY offer new skins, allowing us to see ourselves changed at a time when change seems increasingly impossible. And yet, what “Refashioning” pursues is not so much the thrill of feeling distinguished in a crowd: it invites us to take on the much more difficult challenge of fully occupying the flesh in which we are.

“Refashioning: CFGNY and Wataru Tominaga” airs at the Japan Society in New York through February 19.

Danielle Wu is a writer and curator based in Brooklyn, New York. She is currently the Communications and Database Manager at the Asian American Arts Alliance (A4) and was previously a Digital Fellow at Democracy Now!