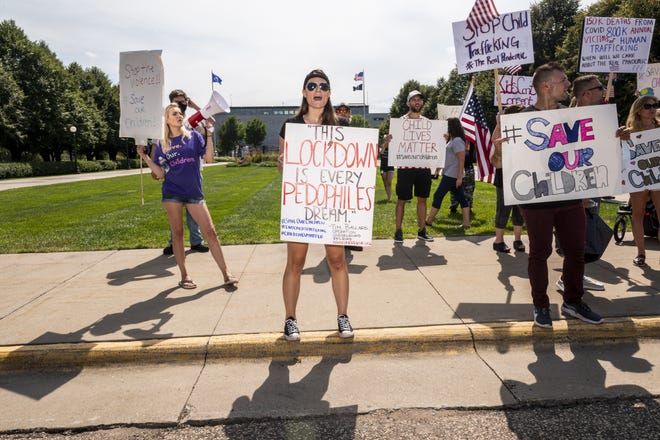 A January 19 Instagram post features a screen recording of a now-deleted TikTok. The video shows a woman opening two hidden doors to show an underground theater.

“This is where the elites sacrifice children,” reads the text at the start of the video.

The video garnered over 20,000 likes in four days. Similar versions of the claim were shared on Instagram.

This is yet another baseless QAnon conspiracy theory. The theater was built in Italy in the 19th century and hosts performances, workshops, concerts and events for children. There is no evidence in the video or elsewhere that child sacrifice occurs there.

The same video has been shared in recent years by users on Facebook and YouTube – minus the conspiracy theory text.

It shows the Donnafugata Theater, whose website features photos from inside the theater, which match the theater shown in the Instagram video.

Housed in a medieval-era castle in Sicily, Italy, the theater was built in the early 19th century and restored in 2004 as a family theatre. It regularly hosts shows, workshops, concerts and events for children, according to the website.

There is no evidence that the theater was ever the site of child sacrifice.

This child sacrifice claim is one of many baseless conspiracy theories perpetuated by QAnon, whose proponents believe the world is run by a cabal of cannibalistic Satan-worshipping pedophiles.

QAnon conspiracy theories lack evidence or basis in reality and have repeatedly failed to materialize in recent years.

For example, in 2021, a crowd of supporters gathered in Dallas, Texas, waiting for John F. Kennedy Jr. to reappear and announce that former President Donald Trump would be reinstated as President. Kennedy, who had been dead for over 20 years, never appeared. Earlier that year, on Inauguration Day, many supporters were expecting a “great awakening,” where they believed Trump would declare martial law and bring his political enemies to justice. That never happened either.

Fact check: Photo of Brazilian ‘QAnon shaman’ dates back to 2021, not the January 8 riots

USA TODAY has previously debunked several other QAnon claims, including the claim that a historic sculpture shows adrenochrome harvested from a child and that a set of images proves a QAnon-linked cannibalism conspiracy theory.

This claim has also been debunked by PolitiFact.

Thank you for supporting our journalism. You can subscribe to our print edition, ad-free app or e-journal replica here.

Our fact-checking work is supported in part by a grant from Facebook.