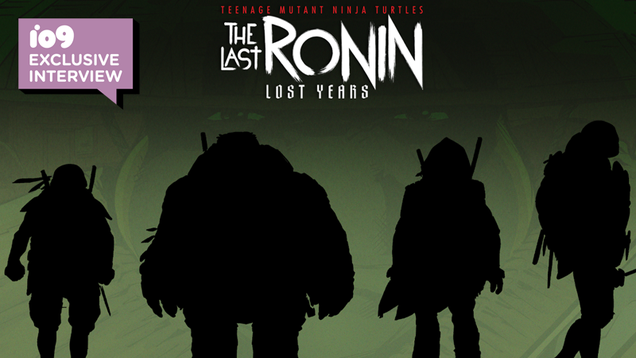 Today sees the launch of TMNT: The Last Ronin – The Lost Yearsa new anthology series that looks back on the past and future of IDW’s beloved apocalyptic Ninja Turtles branching out. But it’s not just a throwback for those beleaguered iterations of the Turtles, but for Last Ronin artist Ben Bishop and the continuation of a dream come true.

Bishop returns to illustrate The lost years alongside SL Gallant, in a five-issue miniseries that spans The Last Roninwith stories set both before and after the main narrative of the original series – a dark future where Michelangelo, the last surviving brother of the Hamato clan, fights against the authoritarian descendants of the Foot, seeking revenge on their fallen family.

The Last Roninthe popularity of gangbusters, even among IDW’s already very popular ongoing bands TMNT comic book series, now totaling over a hundred issues – has seen the series explode beyond its comic book roots into TMNT merchandise, allowing Bishop to not only return to his world in the comic book pages, but on the packaging of characters from a franchise he’s collected his entire life. To know more about The lost years and the return of Bishop The Last Ronin— including designing a new generation of ninja turtles — io9 recently chatted with the artist via email. Check out our full interview below!

James Whitbrook, io9: How did you feel seeing the reaction among TMNT fans at The Last Ronin? Did you expect to return to this version of the turtles?

Ben Bishop: Unbelievable. Hit. Valid. As if I had finally succeeded. I had tried to enter inside these TMNT comics for… well, 11 years, but actually I’ve been actively pursuing IDW books since 2012. So now finally at the table and I have my chance to literally shape the future of the TMNT (who are largely responsible for training me and my job – not to mention what Kevin [Eastman] and Pete [Laird] shown was possible with self-publishing and creator-owned comics). It was quite an out of body experience, to say the least. A great moment for me and my works. To work on these pages, with these characters, the seriousness of what I actually draw and the overwhelmingly positive reception it receives… It’s a feeling I will carry on for the rest of my life. That’s what I want to feel when making comics, and what I want readers to feel when they read them. It was very special. That kid inside was very proud of me.

io9: Tell me how you got involved in lost years in the wake of the original The Last Ronin series. What made you want to come back?

Bishop: I mean, when Kevin Eastman asked you to design NEW TURTLES, there really was no question. I was right to work. Character and setting design was really important to all of us in The Last Roninbut I think Kevin and I particularly appreciate the opportunity to just invent or design something brand new. The Last Ronin was a dream project in that sense because not only did I get to draw these monumentally huge, well-known characters, but I got to put my own aesthetic, ideas, and sensibility into them. Kevin would come in with loads of ideas and sketches, and being the true co-creator that he is, he would just let me run with it from there. And I have to say that part of the “great feeling” I described above must no doubt be due in part to Kevin’s trust in me. We work very well together (as people can see in our other book, Blood samplewith writer David Avallone).

io9: You somehow deal with the aesthetic already established in The Last Ronin here, even though we see it at different times and from different angles. In what ways did you want to push and evolve the work you did on the original series here in this new series?

Bishop: So, lost years is both a prequel and a sequel to The Last Ronin. (People should have figured this out, I guess, so hopefully I’m not spoiling anything here!)Ronin framing sequences with new turtles, Casey Marie and April, while SL Gallant handles extended flashbacks to an earlier time The Last Ronin. Each issue also advances in time. So I take that for granted Last Ronin world and these characters and ensuring, from a design perspective, that they visually grow and evolve through the artwork with each issue.

For example, maybe over time things get better, technology advances, clothes become sleeker and more streamlined…or maybe it just goes the other way and things just keep going. become increasingly post-apocalyptic and sinister. All the while, these new turtles are growing. I spent a lot of time and care integrating these storytelling elements into the artwork. Hopefully this will make a big difference in further immersing the reader in the book. I think it’s okay.

io9: Not only are we reuniting with Michelangelo this time, but we’re getting stories with April, Casey Marie, and the New Turtles too, and at different points in their lives. What was it like not just going back to The Last Ronin design for them, but also have to design new turtles at different ages?

Bishop: A dream come true, but a ton of work! Kevin and Tom [Waltz] first told me I would be designing a new turtle quartet when we were at our massive CGC signing in Florida (already on another dimension of “Is this real life?” to be there and sign thousands of Last Ronin books alongside the Escorza brothers and Luis Antonio Delgado). Reality probably didn’t fully sink in until I got home and got to work. I came out with 12 different new turtle models, from babies to teenagers. These went around for about a week while everyone picked their four favorites. It was an exciting and crazy time; Nickelodeon loved the designs, and ultimately we all settled on the four you’ll come across in lost years #1. The same goes for Casey Marie and April – there will be separate new designs, with each issue. I feel really close to these characters now.

I know I said it was a ton of work, but creating these new designs is my favorite part. Also, as I worked on these designs, I couldn’t help but fantasize about a willful future. TMNT NECA figures in existence…

io9: What can you tell us about some of the stories we’ll see in lost years? Was there a particular issue that was hard for you to visualize, or an issue that you were really looking forward to working on?

Bishop: Definitely problem #1. There was a lot to establish from the start, and once it’s out there’s not a ton of ability to go back and change something. So of course the new turtle designs were really important to me, and I think the end product is very cool. There’s also the new sewer lair (just wait until you see it!) and all the stuff in it, arranging it in such a way that it really feels lived in and real. Eventually, if this project is suitable for making a cartoon or a movie or something like that, they have a complete plan and sets designed and ready to go.

io9: Not necessarily lost years-related, but as a toy fan, I had to ask: as you mentioned, we’ve started getting action figures from the designs of The Last Ronin from NECA and Playmates now. What was it like for you as an artist to not only see your work on the packaging, but to see those designs that you helped design come to life in physical form?

Bishop: Wishful thinking, I’m really trying to manifest some lost years toys, haha. Again, it’s a dream come true. Foolish. It would be one thing to just have toys based on the comic, but it’s another thing to have them based on some of your designs. And even one more thing on top of all that to get to draw the art of packaging!

I had everything TMNT when I was a kid, like so many other kids, but toys were probably my biggest inspirations for “my” turtle designs (alongside costumes and the live-action Henson cartoon), and a lot of that was packaging illustration. If someone had given this 11-year-old boy who was drawing turtles on the living room floor a sewer game and a stack of TMNT toys and comics and said to him, “One day you’re going to be working alongside the guys who created this, helping them not only tell the end of their story, but the start of a new one… Oh, and there will be toys,” I might almost have pulled Kool-Aid through my nose and all over the mat. I’m inside now! And I feel like this is my chance to breathe in the next generation of fans.

Want more io9 news? Find out when to expect the latest Marvel, Star Wars and Star Trek releases, what’s next for the DC Universe in film and TV, and everything you need to know about the future of Doctor Who.