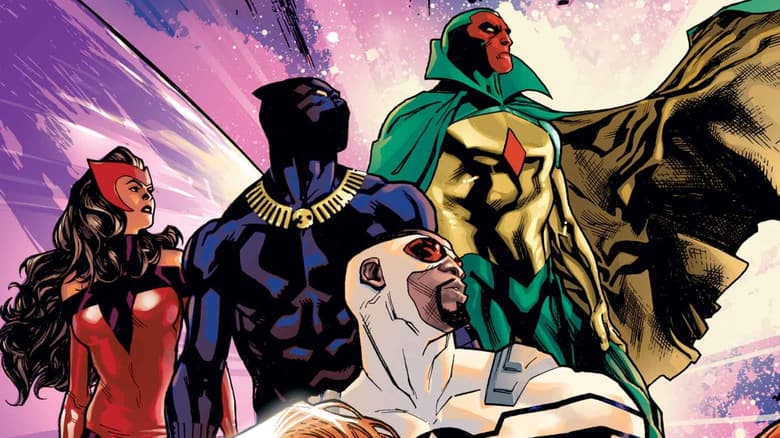 In May, superstar writer Jed MacKay and Marvel artist Stormbreaker CF Villa will take the reins of Earth’s Mightiest Heroes in a new series of AVENGERS just in time for the team’s 60th anniversary!

MacKay and Villa’s AVENGERS will follow Jason Aaron’s monumental work on the title, which currently culminates in the epic AVENGERS ASSEMBLE crossover. Readers will experience an all-new Avengers lineup led by Captain Marvel that includes Iron Man, Thor, Captain America, Black Panther, Scarlet Witch, and Vision. This team of some of Marvel’s greatest icons will come together when they are gifted with knowledge of THE TRIBULATION EVENTS, a series of large-scale catastrophes that will cause upheaval throughout the known universe. Influential artist Stuart Immonen will make a celebrated return to Marvel Comics for the title, giving the ongoing series some jaw-dropping covers.

Fans got their first glimpse of MacKay’s overall AVENGERS plan in last month’s year-end one-shot, TIMELESS. Readers have followed Kang on his hunt for the “MISSING MOMENT,” an ambitious quest that brought him into direct conflict with the Twilight Court, a group of bizarre superheroes led by the mysterious Myrddin. Now a dangerous game is brewing and the prize is bigger than anyone can imagine… Enter the AVENGERS! Will they be able to triumph over the events of the tribulation and learn the truth behind these earth-shattering threats? Or will they be reduced to mere pawns in an extraordinary plan beyond their comprehension?

Along with awe-inspiring new villains and never-before-seen architects of the cosmos, the upcoming saga will weave insurmountable stakes and drama as new Avengers missions weigh heavily on the team’s mutual trust. The events of tribulation will challenge the Avengers in audacious ways and force them to prove, beyond doubt, that they are the most powerful force in the Marvel Universe. It all starts with a bang in May’s AVENGERS #1 when the Avengers take on Terminus and prepare for the first of the tribulation events: IMPOSSIBLE CITY FALL!

The star. The Icon. The witch. Building. The God. The engineer. The king. The world is still in peril and a new team of Avengers are mobilizing to face all the dangers that dare to threaten the planet. But when Terminus attacks, an insidious new danger arises: one the Avengers know all too well, and one that presents itself to them in the most dangerous form: that of a friend.

“I’m extremely excited to kick off the final chapter of AVENGERS with my former BLACK CAT teammate CF Villa!” MacKay said: “I grew up with the Avengers, blending their exploits from the 60s and 70s as a kid, and having the opportunity to chart the course of Earth’s Mightiest Heroes is a rush, especially coming from street level and/or some weird niche that I’ve worked in for the past two years. It’s big, loud Avengers stuff – nothing about this story should ever feel small or inconsequential, and our lineup reflects that. The heavy hitters and iconic Avengers are front and center—The Tribulation Events are coming, and only the Avengers can take them on.”