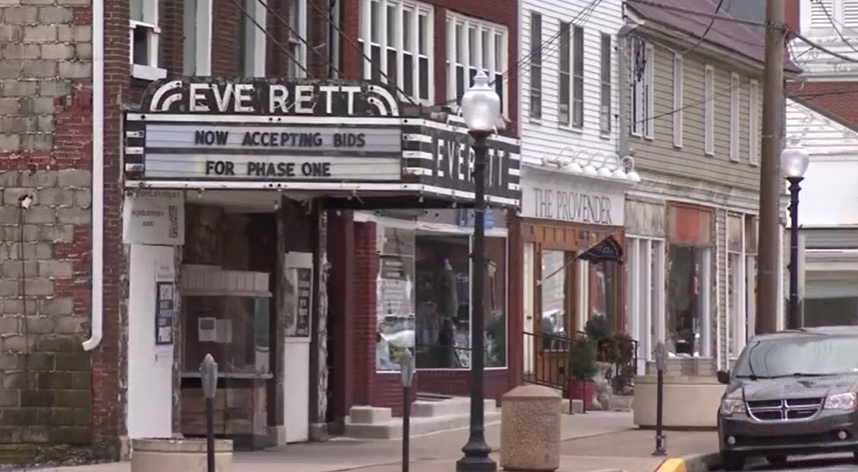 “Our goal is to be able to light up the marquee to celebrate the 100th anniversary,” said Reimagine Everett Board Member Leah Pepple.

The theater opened in July 1923, but since the late 1980s those doors have been closed.

“These buildings are in such disrepair that they were a blight on the community,” said Reimagine Everett President Ken Tewell.

A non-profit organization, Reimagine Everett hopes to transform the borough’s downtown into a revitalized area, including the Everett Theater.

“Everett has really taken off in the past few years,” Treasurer Marla Pennabaker said. “We have wonderful businesses and restaurants in town, and I think that’s the missing piece.”

The organization was chosen to receive a $100,000 grant under the Pennsylvania Historical Museum Commission’s Keystone Building Program to transform the theater into a community event center. Reimagine Everett also raised funds to match the grant, bringing its current funding total to over $200,000.

But this funding will only cover the first phase of the project.

“Everything we need to do here is going to take about $2,000,000 to accomplish,” Vice President Kaci Batzel said. “We’ve finally gotten to the point where we can start doing things that people will actually be able to see from the street.”

Receive daily updates on local news, weather and sports by signing up to the WTAJ newsletter

The team is working to raise that $2,000,000 and hopes to complete the entire project in 2026. You can donate or learn more about their work on the Reimagine Everett website.