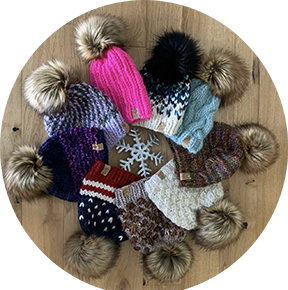 When they got married, a woman told her husband that they could share anything and everything in their lives as long as he promised never to look in any particular drawer. Of course, the man began to imagine all sorts of things stored in this drawer: from a lover’s notes to pieces of a corpse. As their marriage went on, he would ask her to let him have a look in that drawer, but she never broke. It was her private space, she explained. And could he please give her that one thing? When she died, the first thing the man did was open the drawer of her secret life.

It was filled with pom-pom hats. So many different styles, sizes and colors came out of the drawer, so full because of the collection she had amassed over the years. The husband was stunned and burst out laughing, acknowledging so many hats off to their life together. Each hat was almost a keepsake – she had worn that hat on their honeymoon, this one had been for a ski vacation in Europe. There was their life, a story told in bobble hats. And man, he laughed. A full laugh, from his belly with the love for his wife pouring out with every jolt of his body.

As far back as I can remember, I got my first bobble hat when I was about 6 or 7 and we went somewhere on a family trip out west. It was a pale yellow with a few very well-spaced pink horizontal floral stripes and a pale pink pom pom that was about the size of my little head. It could even have been bigger. It was the early 80s and pastels were dominating the fashion world. My whole outfit was a bold statement of solid pale pink and I have no idea to this day how my mom kept it clean. For some insane reason, I had decided to collect pins from every ski area we visited and attached them to this already ridiculous bobble hat. I liked it.

In the late 80s, my pom poms were neon with the most hideous knitting patterns imaginable. In the 90s, my pom poms were bold, matching the blue and purple blocking of my super fashionable Descente jackets. As I got faster and joined the Killington ski team, I switched to these tiny Nordic Swix pom poms with intricate jacquard patterns in the knit. My favorite was red and white. In the 2000s I kept the intricate patterns but went green which landed me on the Pico trail map cover. For me, pompoms and skiing were intimately linked. How could you do one without the other?

Freya, the Norse goddess of war, was seen wearing a pom-pom in the late 9th century and French sailors still used pom-poms to protect their heads from ship’s beams in the 15th century. In fact, the original term is pompon, a French word for little bobble thing. The Scots have worn pom poms on their tammies (Tam O’Shanter) since the late 16th century. Many people wear a bobble hat to navigate their small spaces, like their attics or basements. The pom pom was used by military and religious organizations to denote rank and during the Great Depression pom poms were the cheap and easy way to dress up any outfit.

Since the Vikings already wore pom poms on boats, it’s no exaggeration to imagine that they also wore them when they invented skiing and worshiped Ullr, the god of snow. Perhaps they used these pom-poms to protect themselves from tree branches while skiing, just as they would have done from large wooden beams in their homes and on ships. In my mind, the pom pom might actually be the original ski beanie.

I have a box of pom poms overflowing with love and memories, but I keep my three favorites of the moment on pillar candles to dry up overnight. Because yes, I always wear a bobble hat when I ski. I went back to the big, bold pom poms of my childhood. My athletes call me Coach PomPom and they can spot me halfway.

Right now I’m obsessed with my light purple AllieCap with a big brown pom pom. It does exactly what it was designed to do 14 centuries ago: it protects me from low branches when skiing in the woods and makes me feel like a ski princess. My pom pom beanies are a representation of me, from the knitting to the pom pom itself, each beanie telling a story of my life. Put them together, you have the “Tales from a Female Ski Bum”.

Merisa Sherman is a longtime Killington resident, KMS coach and local real estate agent. She can be reached at [email protected]