Welcome to The Rundown, our daily breakdown of the comedy news we missed from the day before. A link to share? Email our team at rundown@multiversitycomics.com.

In case you missed it, Mignolaversity took a look at the April releases. 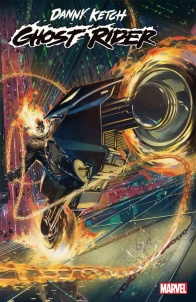 – Via Newsarama, Marvel has announced “Danny Ketch: Ghost Rider,” a five-issue miniseries revisiting the hero’s ’90s era as the Spirit of Vengeance. It will be written by the character’s co-creator, Howard Mackie, with art by Daniel Picciotto (“The Ghost”), and will see Ketch embroiled in a gang war in New York City. The first issue goes on sale May 17, featuring a cover by Ben Harvey.

– Via The Root, Marvel also revealed the cover of Miles Morales Suspended: A Spider-Man Novel, a new prose novel by Jason Reynolds, with illustrations by Zeke Peña. As the title suggests, the book will find Miles suspended in school, forcing him “to figure out how to save the school and himself, all from one piece.” A sequel to Reynolds’ 2017 novel Miles Morales: Spider-Man, Suspended will be released on May 2.

– HBO Max has released the trailer for Harley Quinn: a very problematic Valentine’s Day special. The bonus episode will see Harley Quinn try to make her first Valentine’s Day with Poison Ivy as special as possible, despite her wish for a low-key date; it will also see the return of Michael Ironside as Darkseid. It falls on February 9.

– Apple TV+ acquired the rights to drops of god, the live-action series based on the manga by Tadashi Agi and Shu Okimoto. An English, French and Japanese co-production, the series follows Camille (Fleur Geffrier), a woman who inherits the world’s largest wine collection from her father, but to claim it she must prove she is a greater expert in wine than his protege Issei (Tomohisa Yamashita). The eight-part series will be released later this year.

– Papercutz has announced that Simon & Schuster will be their new distributor, effective immediately. The children’s graphic novel publisher’s books were previously distributed by Macmillan and Diamond outside of the United States. The move brings Papercutz closer to owner Mad Cave Studios, which acquired the company in August, and whose comics are also distributed by Simon & Schuster.