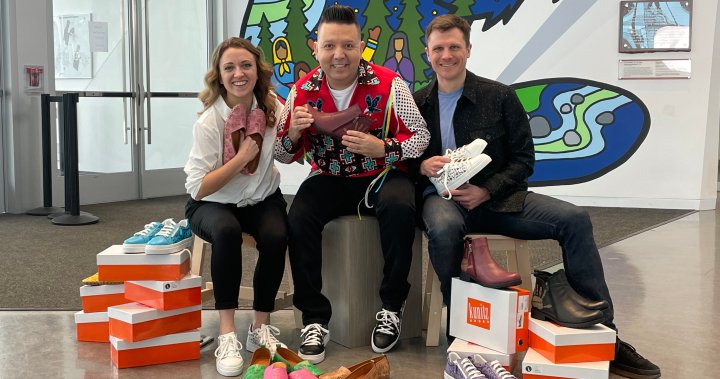 It’s a collaboration that has been going on for a year and consists of combining footwear, art and indigenous culture.

Kunitz Shoes reached out to local indigenous artist, Lance Cardinal, exactly one year ago – January 25 – about this collaboration and here it is, launched for the first time.

“Part of reconciliation, which we always talk about, is talking about all things Indigenous, not just the beautiful ideals of our people, but also the hardships we go through,” Cardinal said.

The shoe line offers a variety of styles including sandals, boots, flats and sneakers. There are 12 different styles in total, which come in a range of beautiful colors.

The story continues under the ad

“But also something people will love to wear and we were able to get a message across through the collection as well,” she said.

This message is displayed on the shoe. The flat has seven different animal heads representing the seven grandfather teachings and is embroidered directly into the leather.

“(It offers) different ways to integrate the Cree language and the Métis language into the collection, which we did amazingly,” Cardinal said enthusiastically.

“And not to mention the ideas of the First Nations people who speak of what we believe.”

Another significant piece is the red boot.

“The Red Boot is sort of – or pays a mosh for – the Red Dress movement, honoring murder and missing Indigenous women, talking about missing family members who are lost and never come home,” Cardinal said.

One hundred percent of sales of the red boot go to the Creating Hope Society, which helps Indigenous families who have experienced trauma.

The story continues under the ad

“It’s to provide services and support to families; To be able to do more and bring in people like psychologists or whatever, maybe elders to help the families. It’s huge for them. says Ricard

Advocates hope the $400,000 fund will bring new awareness to the MMIWG in Saskatchewan.

It is an excellent collaboration of which Cardinal is extremely proud. And a hint: it won’t be the last line either.

“It’s great to be celebrated in a good way again and to wear shoes on feet that say ‘hey look, we’re indigenous people, we’re proud of who we are and we’re here to say it out loud. voice who we are. ‘ That’s what the collection is all about. »