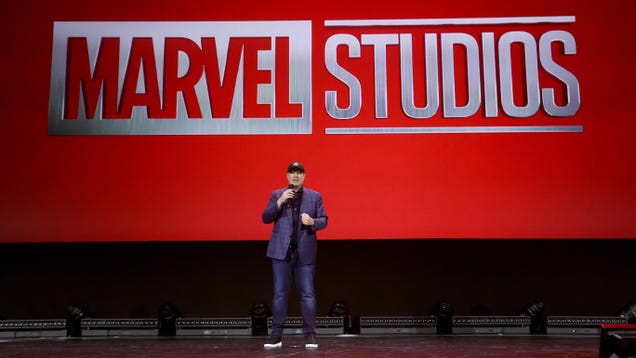 If you had to ask Ronald McDonald if he thinks people will ever get tired of eating hamburgers, what would he say? Would it be something other than no? His whole life has been spent selling burgers, so why would he be anything but optimistic about their future? It’s important to him that people not only still buy burgers, but that they believe he is still invested in the future of burgers.

Anyway, Marvel Studios boss Kevin Feige recently appeared on Jason E. Squire The Movie Industry Podcast (via The variety), and as you can probably imagine, he feels the same way about the future of superhero movies as Ronald McDonald does about the future of hamburgers. Feige said that pretty much since his “second year at Marvel” people have asked him if he thinks comic book movies are a “fad” and if their popularity will last much longer, and he has this naturally optimistic take:

I didn’t really understand the question. Because to me, it was like saying after Gone with the Wind, “Well, how many more movies can be made from novels? Do you think audiences will get mad at movies adapted from books? You would never ask that question because there is an inherent understanding in most people that a book can be anything. A novel can have any type of story. So it all depends on the story you’re translating. Non-comic readers don’t understand it’s the same in comics.

There’s a bit of dishonesty in his answer, because the vast majority of comic book movies that have been made are superhero movies, and not every movie based on a novel is an epic romance of the era. of the civil war, but it is technically to correct. There are other types of stories people could tell with comic book adaptations, but again, “comic book movie” and “superhero movie” tend to be pretty synonymous.

Feige went on to say that Marvel has “80 years of the most interesting, emotional, and groundbreaking stories that have been told” in the comics, and they all have adaptive potential, so just do different genres and make different kinds of movies. as required. He thinks that, even after all these years of Marvel movies, audiences will stick around as long as they have “the Marvel Studios logo above the title and a seed of our publishing story idea.”

But then again… he’s only doing superhero movies at this point. Maybe his argument will carry more weight if Marvel Studios starts making rom-coms based on pre-Hellcat Patsy Walker or the real thing. Tomb of Dracula horror movies with no Blades or Morbius in sight. Either way, it’s good to know that the guy who makes superhero movies still loves superhero movies.

More from The AV Club