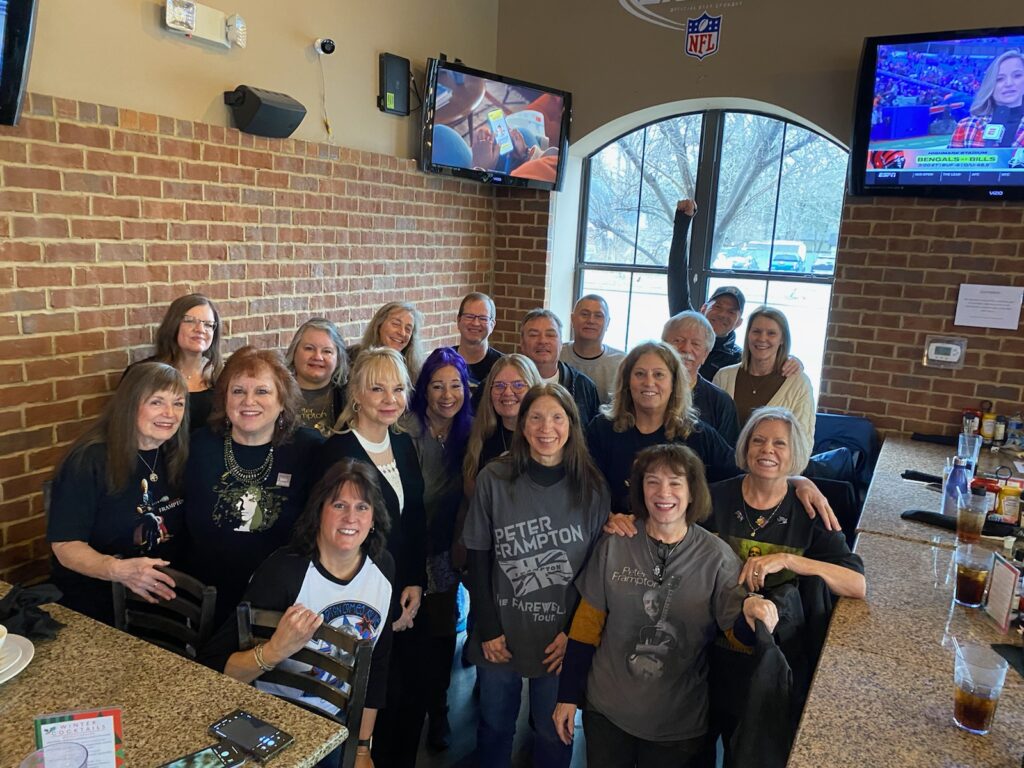 72-year-old English rock musician Peter Frampton rented the Tucker Theater and gave a free concert on Sunday. The concert was filmed by UK broadcast group Sky Arts and will be shown on TV at a later date.

The show was a welcome throwback to the concert experience before the smartphone era. As it was being filmed, personal photography was not permitted. Instead of staring at Frampton through a sea of ​​phones in the air, the view was clear and everyone lived completely in the moment.

As Frampton played his hit song “Lines on My Face”, the first three rows of the audience stood up, cheering and waving, when he sang the line, “So many people, my family of friends, trying so hard to make me smile.

Frampton greeted all the familiar faces, many of whom have been seen in his front rows countless times.

These faces belong to a group called Family of Friends, a name that pays homage to the line in Frampton’s song.

The group, consisting of approximately 25 people, is a collection of fans from across the United States, 14 states in total.

“We have gathered for conventions from all over the United States. We picked a show on a tour and we were like, ‘This is going to be our convention,’ so we all go there, we pick up hotels, we see the show together, we have lunch, we have dinner,” Kim said. Martin from North Carolina, who has been a fan since he was 13 and has seen 76 shows. “It’s a lifelong friendship,” Martin said.

Rose Marie Hunter stopped counting the shows she attended at around 200. “I grew up with him. I just turned 24 the first time I saw him, and I’m 71,” she said, “His music really pulled me into life.”

Rose Marie and Angel, another member of the group, followed Frampton’s European tour for four shows at the end of 2022. “London was the best. It was absolutely fantastic,” Rose Marie said with a smile.

Frampton’s all-black outfit contrasted sharply with his white hair and bright red guitar, which he only used when not holding his Gibson Les Paul, Phenix.

“We call it the Phoenix now because it’s risen from the ashes,” Frampton said. The guitar was a gift from an old friend. She disappeared several years earlier, was miraculously recovered, and returned to her renowned position as Frampton’s guitar of choice.

The performance was made even more impressive given the diagnosis of Frampton’s inclusion body myositis. The disorder weakens the muscles, but Frampton played his guitar as smoothly as ever.

The mess is what caused him to pull out of touring, so the show at the Tucker Theater was a very special opportunity for his fans.

“It was such a special night for all of us. A night we never thought would happen due to Peter’s diagnosis and the ongoing tour. Lots of tears flowed tonight, but also, more memories with our group of friends who became a family because he and Peter shared his music,” Martin said.

Frampton concluded the concert with a touching rendition of the Beatles song “While My Guitar Gently Weeps”. “I love you and I’m going to keep fighting,” Frampton said as he left the stage.

The concert will be broadcast on UK television later this year.

Odie Blackmon, an associate professor in the recording industry department, connected Frampton’s team to MTSU for the free event.

Blackmon credited Andrew Oppmann, vice president of marketing at MTSU, and Beverly Keel, dean of the College of Media and Entertainment, for making the connection a reality.

“I immediately attracted Andrew Oppmann and Beverly Keel…” Blackmon said of creating the event. “I don’t put on concerts, but I connect people…that’s what the music industry is for.”

The connection led Frampton to the Tucker Theater, which offered fans an intimate experience to listen to and connect with the singer-songwriter through his music.

The concert provided access to real-world experience for many College of Media and Entertainment students. The students followed the crew as they loaded up for the event on Friday.

“It shines a light on our program…” Odie remarked on the importance of events like these on campus. “Someone out there might see [promotion] for the gig and say, ‘Wow, they have a songwriting program? I did not know !”

Makayla Sulcer is a photographer and writer for MTSU Sidelines.

Kailee Shores is the editor of MTSU Sidelines.