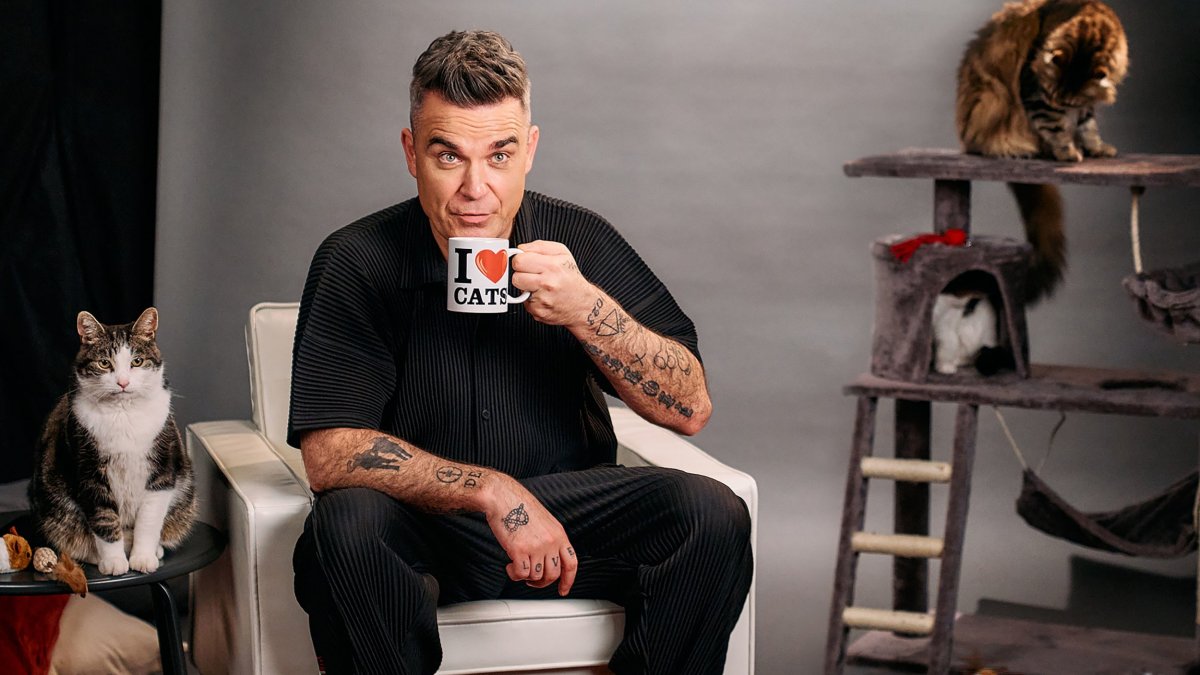 “Hi, I’m Robbie Williams and I’m thrilled to announce that I’m the new voice of Felix,” the star says in a new promotional video for the cat food brand. Williams sits in an armchair surrounded by cats. He is holding a mug that reads “I love cats.” You’d be forgiven for thinking it was a fever dream but, alas, it’s our reality: Robbie Williams’ first song in 13 years will be a jingle about cat food.

You can’t help but think: poor Robbie. What an ignominious end to his career. But should we pity the multimillionaire? Certainly not: he was probably paid millions for this particular concert. The 48-year-old singer is the latest celeb to cash in on her fame and go public with a random and confusing side-hustle. There was a time in 2018 when Pierce Brosnan got in trouble with Indian authorities for appearing in an advertisement for chewing tobacco brand Pan Masala. Delhi health officials have threatened to fine him £56 or jail him for two years for his approval.

Then there was Kevin Bacon’s series of British EE commercials which featured him parachuting out of a plane to promote bargain network deals. We watched, dumbfounded. Even George Clooney, one of the world’s most famous actors and worth £405m ($500m), has signed a contract to be the face of a sequence of Nespresso adverts, dressed in blue pajamas. Those appearances earned him over £31m.

More recently, even the infallible Beyoncé caused confusion by performing a concert – her first in four years – at Dubai’s most expensive hotel – the UAE’s draconian anti-gay laws not being reason enough to refuse a £19m ($24m) paycheck. His last album Renaissance has been widely claimed as a love letter to the legacy of black and queer dance music pioneers. Rather tellingly, during her 19-song set, she didn’t play a single song from her new album.

For most people, it would be hard to resist the temptation to earn a few million singing about cat food on national TV, but celebrities aren’t most people. Robbie Willliams net worth is estimated at £248 million ($300 million). Katy Perry is worth £276 million ($330 million). So why do celebrities, who are already among the richest people in the world, continue to do this?

Are they okay? Apparently yes. “The work is so inconsistent and celebrities have become accustomed to a certain quality of life with an expensive house to rent,” says Bee Adamic, music industry public relations expert and co-founder of Liberty Music PR. “So it’s difficult between jobs.”

And celebrity spending is monstrous. Let’s break it down: while big events like the Oscars or the Brit Awards are usually free for celebrities, celebrities still have to pay their PR team and management team for inviting them in the first place. Usually, celebrities pay 3-10% of their earnings to their agent for booking a gig. “But in my experience, it’s usually 10%,” says Beeching.

Then there are the glamor teams. “The lifestyle costs can be huge,” says Adamic, who has spent eight years working with countless top musicians in the UK. “These days, you might need a whole team of stylists, makeup artists, a fitness and nutrition team, and an assistant.”

The bigger you get, the more expensive a lifestyle becomes. “A high-profile celebrity spend is typically the number of teams, which can include management, a traditional PR team, events team, reputation team, stylists and consultants,” explains Beeching. Then there are the agents, managers and record labels, each taking their piece of the pie.

It is also necessary to have a consistent presence on social networks. “For celebrities who have an engaged and active social media channel, the biggest cost is maintaining the lifestyle their audience expects to see,” adds Beeching.

She continues, “Of course, most celebrities live ordinary lives behind closed doors, but that doesn’t work for those who regularly update their fans. They have to look influential, which unfortunately doesn’t involve relaxing. at home while watching television.

Celebrities can quickly run out of money, she says. “Those are usually the habits they’ve formed since they became famous,” says Adamic. “They will probably always have to have some form of hair and makeup artist to support them at every event. They always need a new outfit. Their skin, hair and nails need to be on point, always.

But before we feel too sorry for the ultra-rich and famous when we see them in a TV campaign – how the mighty have fallen! – Sometimes these seemingly random ads are about something else entirely. “They may just be pushing their reputation in a particular direction. When done well, it’s a great way to get positive PR while getting paid,” says Beeching.

By appearing in a silly cat food ad, celebrities can stay relevant while looking fun. So while Robbie’s new song “It’s Great To Be A Cat” probably won’t be the highlight of his career, his newfound reputation as a cat-loving prankster might be the gift that keeps on giving.