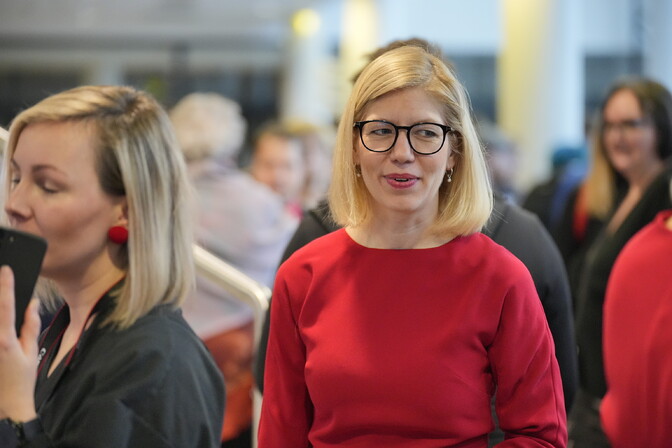 A new funding system has been put in place, which has also led to funding levels not even being clear until this month, rather than the end of 2022.

The problem concerns small “municipal theatres” and private theatres, rather than large public institutions such as the Estonian Theater and the Estonian Drama Theater (Eesti Draamateater), both in Tallinn, or the Vainemuine Theater in Tartu.

Theater critic Meelis Oidsalu says the actions of Culture Minister Piret Hartman (SDE) have been both curious and understandable, pointing to the fact that a revised funding system has been put in place, but that in all cases additional funding was provided to some theaters when it became clearer in January that they could be in for a tough time this year.

“Having said that, I also understand Hartman’s actions; if you basically tell a theater at the end of January that their budget for this year will be hundreds of thousands less [than expected]then on a purely human level, some sort of transition phase is needed there,” he continued.

“I am however somewhat disturbed by the fact that in her remarks the Minister criticized the committee of experts who made these decisions, while some managers of private theaters also harass these members of the committee but that they must be held They The question of how to ensure the advisability of such decisions, and the foresight that a theater can also take into account, is a question for the Minister of Culture and the [Ministry] general secretary, rather than the committee,” Oidsalu continued.

Oidsalu could not say how well the committee, which gave theaters ratings based on artistic aspects, carried out this task, but said the media reported that funding for the Tallinn City Theater (Tallinna Linnateater) would be cut was no surprise.

Changes could be timely within this organization, he said, which could include its management by the city of Tallinn, rather than the state, and adding that the latter has already provided millions of euros for the construction of the new theater building.

Another critic, Valle-Sten Maiste, of the cultural newspaper Sirp, says he assumed that two theaters, VAT Teater and Von Krahl, both in the capital had been unfairly caught up in the spiral of reforms – which awarded operating grants to theaters – set up. “Especially the VAT Teater, Von Krahl and, to a lesser extent, the Tallinn City Theatre.”

“If we look at the goals of theater funding reform, we have tried to move from routine funding established long ago to funding that takes quality into account. If we look at the Tallinn City Theater , there is no shortage of such a theater – no matter how much it was appreciated – the VAT Theater is really lacking,” said Maiste.

“I would not dare to say that the reform [assigning operating subsidies to theaters] was completely unnecessary, but rather that it resulted in a completely paradoxical solution – at first it didn’t work, but the aspects that didn’t work began to be patched up depending on the position of ministerial power” , he continued.

Paul Aguraiuja, the director of the Tallinn Art Hall Gallery (Tallinna Kunstihoone), also expressed his concern – not so much on the principle that the Minister of Culture distributes additional funds to theaters as on the field of visual arts being treated differently theaters.

“Naturally, funding should not be taken away from theatres, but the Ministry of Culture should also stop ignoring the field of visual arts. We haven’t been spoken to for years,” Aguraiuja continued.

The Ministry of Culture itself indicates that the decision to finance municipal and private theaters should be approved in a few weeks, based on the decision of the committee of artistic experts.

Minister Hartman said the issue arose over new regulations which postponed the operating grant application cycle for theaters to early December, which meant that amounts for 2023 could only be announced. after the start of the new year.

Hartman said: “The ministry’s mistake was that we promised the performance institutions that we would announce the numbers at the end of last year, but so far the completion of this protocol and its explanations have been delayed, as the application round was postponed too far.”

Eight institutions will receive reduced funding this year, she added.

“A total of 23 performance institutions submitted a request for operating funds, eight of which would have lost, compared to last year. These eight institutions will receive additional coverage for their losses, in terms of the transition period,” said Hartman continued.

Granting any additional sums would be an exceptional decision, but he would certainly like to review the regulations which served as the basis for the determination of the cinema subsidies.

“The debate has been very heated, and I want to sit down again with the industry, to determine whether it makes sense to move forward with the settlement as it is,” Hartman continued.

Speaking to ETV news program “Aktuaalne kaamera” (AK) later on Tuesday, Valle-Sten Maiste said the issues to be addressed should have been clarified before the aforementioned reforms, while also questioning their general objective, rather than relying on “some sort of miracle algorithm”, when the minister could be portrayed as saving the sector with any subsequent funding – an inaccurate picture, he said.

Meelis Oidsalu, meanwhile, later told ETV morning show ‘Terevision’ that the new revised funding system was intended to be inclusive, but was implemented too quickly and without thought, in terms of large, state-owned performance theaters versus smaller, private, and sometimes experimental theaters.

“It’s always like that, that if the power or funding base changes, then outcry ensues; it’s like that with all systems,” he continued.

Despite ‘theatre queens’ misunderstanding the role of the panel of experts in allocating funds, the new system is far fairer than its predecessor, which even led to legal action over the Old Baskin’s Theater (Vana Baskini Teater), added Oidsalu. .

The Minister of Culture added that the decision to provide additional sums to some theaters followed negotiations held in the ministry building and involving experts and theater managers, and after it became clear that some theaters would be seriously in the red in 2023.

Plans to distribute €3.7 million to municipal and private theaters in 2023 have seen this figure revised upwards by €850,000, covered by funding reserved for experimental artistic performance projects and by the ministry’s reserve for extraordinary expenses , split roughly 50-50.

Last year, the state granted €3,466,426 to municipal and private theatres.

The daily Postimees reported on Tuesday (link in Estonian) that the expert committee’s decision would affect three theatres: the Von Krahl, the VAT Theater and the Tallinn City Theatre.