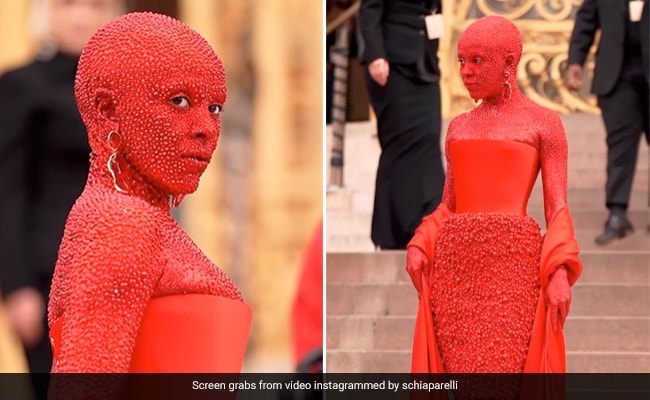 At the star-studded Schiaparelli show during Paris Fashion Week, American rapper and singer Doja Cat turned heads with her unique ensemble. The unrecognizable 27-year-old singer showed up at the Schiaparelli Haute Couture show on Sunday sparkling in red crystals. According to voguethe singer’s on-trend look featured 30,000 Swarovski crystals to be exact.

Doja’s sparkly look was created with the help of celebrity makeup artist Pat McGrath. He posted a video of the final look on Instagram and shared with his fans that the whole process involved 30,000 crystals and took almost five hours.

“Such a pleasure to work with the gorgeous @DojaCat and the amazing @DanielRoseberry on the ‘Doja’s Inferno’ look for @Schiaparelli’s Haute Couture FW23 collection. it took to create the look with #TeamPatMcGrath, which was covered in over 30,000 hand-applied @swarovski crystals, was inspiring. The end product was a magical, mesmerizing masterpiece of sparkling brilliance,” wrote Mr. McGrath on Instagram.

He also shared a time-lapse video showing the process of applying Swarovski crystals, which started with placing a wig cap on Doja Cat before adding color and crystals.

While many on social media were blown away by the look, some said it triggered trypophobia. Trypophobia refers to the disgust or fear of a pattern of holes. One user wrote: “Fashion history is being made before our eyes. Another commented: “I’m impressed, but so is my trypophobia. A third added: “Art should comfort disturbed people and disturb comfort. Look at how polarizing the comments are. Daniel’s Schiaparelli keeps couture alive and Doja is a fashion icon in the making.”

Naomi Campbell, Shalom Harlow and Irina Shayk were other stars who attended the show. Meanwhile, Kylie Jenner who wore a ‘lion’s head’ to the fashion event received a lot of flak for her costume, with many slamming her for promoting cruelty to animals.