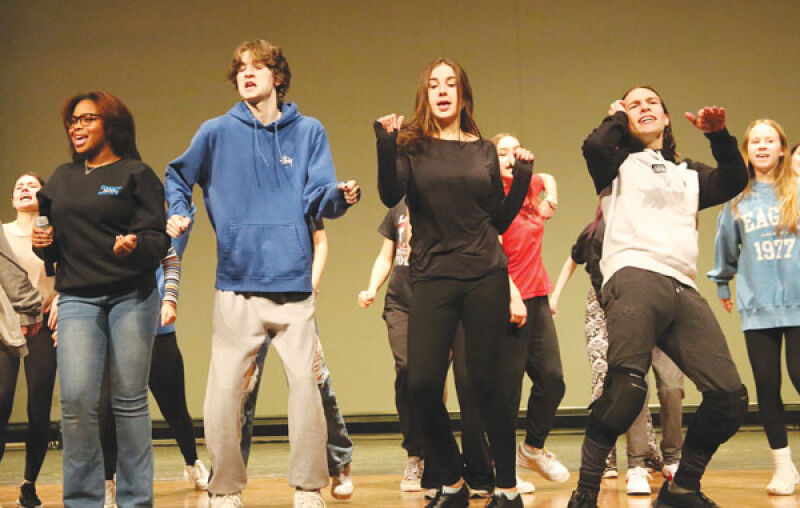 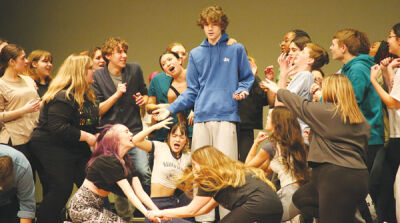 In rehearsal, Ashton Posner as Shrek is surrounded by many fantastical creatures as they beg his help in reclaiming their home – and his private life – from Lord Farquaad.

MACOMB TOWNSHIP — Shrek the Ogre doesn’t want anyone in his swamp, but Dakota High School invites everyone into theirs.

From February 2-4 and February 9-11, Dakota Productions will perform “Shrek the Musical.” Written by David Lindsay-Abaire with original music by Jeanine Tesori, the play largely follows the story of the 2001 DreamWorks film.

“(‘Shrek’) is about an ogre who lives isolated in his swamp,” said director Christian Boni. “One day he sees that his swamp has been invaded by a group of fairy tale creatures from all manner of folklore and nursery rhymes…because they have all been driven from their homes by a ruthless Lord Farquaad.”

Upset by the new neighbors, Shrek (joined by a talking donkey) sets out to track down Farquaad and convince him to take the creatures back. Farquaad agrees to do so, but only if Shrek can rescue Princess Fiona from her dragon-guarded tower.

As Boni’s third Dakota production and first musical to be selected by him, “Shrek” was chosen for several reasons. First, quite simply, is that the show is fun.

“I think it’s a very fitting show for the group of kids we have,” Boni said. “It’s a very fun and exciting show, especially a few years now after the peak of the pandemic. ‘last year.

As part of getting people interested in theater again, “Shrek” has become a household name over the past 20 years. ‘Shrek’ was originally a book by William Steig and is now a six-movie franchise – the most recent entry, ‘Puss in Boots: The Last Wish’, grossed over $250 million at the box- office since its release in December 2022.

Boni also has a personal connection to the “Shrek” production, playing Lord Farquaad in the 2016 production of the Chippewa Valley High School show.

While “Shrek” is primarily known as a comedy, the musical adaptation brings more to the thematic table than meets the eye.

“I would definitely say don’t let (the comedy) undermine the emotional heart of the show,” Boni said. “At its core, it’s a very human show in that it’s about accepting yourself as you are, regardless of flaws. We all have our own hand of cards that we need to play correctly, and everyone is just trying to go through life and get by and do the best they can with what they have.

The show’s themes have resonated with the students working on it, who find it a welcome change of pace from the earlier production of “High School Musical.”

“It’s very different because ‘High School Musical’ is just a normal teen show, but then you randomly get into song and dance because (the characters) don’t know if they ( they) want to play sports or sing,” Ashton Posner, who plays the titular ogre, said. “When it comes to ‘Shrek’ it’s about acceptance and equality among all. I feel like it’s a more complex and intimate experience because it has a deeper meaning behind her.

Claire Kraft, who plays Fiona, rated the show highly compared to other Dakota productions she has starred in.

“‘Shrek’ is the most complex story,” Kraft said. “All the characters are in different predicaments, and it’s just a lot more fun and humorous and there’s a lot more themes.”

Nya Jones, a three-year veteran of the Dakota scene who plays Donkey, found the show to stand out from more conventional productions like “Les Miserables.”

“It’s hard to compare them with such different scenarios,” Jones said. “‘Shrek’ just takes a full turn where you have fairy tale creatures.”

With fantastical creatures comes the need for fantastical costumes, with an example of such being Lord Farquaad. Actor Dante Dagati stars as the squat lord wearing knee pads.

“It’s a bit more difficult with blocking because as someone would take one step, I have to take three,” Dagati said. “I definitely have to put more effort into my movements and my choreography, but it’s something I’ve gotten pretty used to now.”

Tickets for “Shrek the Musical” can be purchased online at payschoolsevents.com/events/de tails/23140.