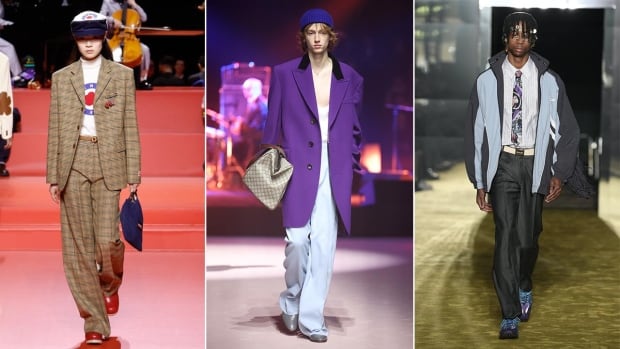 Brands big and small – from old-school upstarts – have been gathering across Europe over the past two weeks to showcase their Fall 2023 menswear collections.

Overall, the collections were typical of what one expects from clothing designed for the cold. There were chunky knits, down jackets, warm wool coats and, when it came to style, lots of layering. But the big takeaways were much more than that, including a parade of checks, ties and a standout shade of the season.

Here are five trends that stood out at the shows in Florence, Milan and Paris.

A renaissance of the tie

Every now and then there is a trend that shows up both on the streets and on the catwalks. A smattering of ties outside the runways prompted onlookers to notice the bulk of menswear on the catwalks, where it was, of course, taken up a notch. It had to happen eventually: Now is the time to rummage through your closet — or your dad’s or grandpa’s — and dust off those ties.

This season we were treated to a study of ties of all shapes, sizes and styles. In Florence, Martine Rose – a guest designer at Pitti Uomo 103 – presented a collection in her sleazy, counter-culture style, with silky ties strewn about, sometimes matching the patterns of the shirts. In Milan, Charles Jeffrey Loverboy showed colorful ties, but it was an oversized dress tie, adorned with an illustration, that stood out. At Prada, ever-high performers Miuccia Prada and Raf Simons opened their show with a pair of trompe-l’oeil looks that featured elongated collars and curved lines that transformed bare chests into tie-lookalikes; the real ones were shown later, in tones identical to the collared shirts. MSGM and Magliano took a more casual approach, loosening the knot and pairing a tie with an untucked shirt, respectively.

Fringes in the foreground

There’s something aesthetically interesting about bangs – the way it moves, the locks hanging down, bouncing back and forth. And the look has been on display for the past two weeks.

Some brands have used the classic fringes that are usually found on a scarf. Belgian cult designer Jan-Jan Van Essche – another of the guest brands at Pitti Uomo in Florence – presented blanket-like shawls that had thin fringes that tickled the floor. In Milan, Fendi showed similarly cut shawls and scarves. What really drove the trend home, however, is Fendi’s purple hoodie with fringes at the hem.

From then on, it was easy to spot the detail, even in a more subtle way, on the accessories at Charles Jeffrey Loverboy and Magliano. And in Paris, Hed Mayner played with raw hems on his jackets… a kind of micro fringe?

Each season brings with it a color that should shine, and for fall 2023, that would seem to be purple.

It all started at Fendi, where Silvia Venturini Fendi presented a stylish collection of modern, casual menswear infused with shades of purple. At JW Anderson, it was some standout leather pieces rendered in purple, including a motorcycle jacket and hardware-covered boots.

The new post-Alessandro Michele Gucci collection featured a purple overcoat as well as a double-breasted blazer with lavender peak lapels. In Paris, Dries Van Noten showed off a slimmer version of the latter style in a bright purple velvet.

Up-and-coming brand Bluemarble has reimagined camouflage with a purple hue while offering sunglasses, outerwear, pants and sneakers in varying shades of purple. At Dior Men, Kim Jones was a bit more subtle, serving up purple Donegal tweed on a coat and skirt. Even Yohji Yamamoto, always gloomy in his work, has incorporated a reddish purple into his palette for fall 2023.

With all the sharp styles, ties and plaids on the catwalks, prep wear looks set for a revival in the coming year.

For these eyes, the star plaid was the gun-club plaid – strips of twill in different colors that create a plaid pattern and, zooming out, a plaid plaid. It’s one of the most classic patterns, and is often seen on warmer, thicker sports coats and pants. This is exactly how Nigo presented it at Kenzo, while also applying it to shorts and outerwear, alongside other throws in the collection. Even Walter Van Beirendonck, who in recent seasons loved bright neon colors and latex (and whose work is rarely mentioned in the same sentence as prep clothes), used a fine houndstooth pattern in colors heritage on jackets.

While it wasn’t surprising to see skiwear – adjoining styles – we called them, overall, typical cold weather collections – there was something different about these looks. For one, the outerwear didn’t feel forced, as it sometimes does when a brand releases a skiwear capsule, for example. Second, there was an embrace of the whole aesthetic of skiing.

While Giorgio Armani and Louis Vuitton both offered runway-ready looks – from puffy down outerwear to (very luxurious) snow pants, mittens and warm headbands – it’s brands like Gucci and Acne who spearheaded the ski-at-home trend by leaning into the après-ski look.

At Gucci, it was more subtle, with knee-high ribbed socks reminiscent of the retro leggings spotted at many ski resorts and a gray ribbed hoodie and pair of sweatpants resembling traditional base layers. A decidedly odd Acne collection included knee-high socks, but also figure-hugging tops and one-pieces that seemed inspired by more modern compression base layers. At Loewe, Jonathan Anderson also showed a collection with lots of leggings. And a very alpine look by Charles Jeffrey Loverboy featured Fair Isle knitwear, gloves and boots – and goggles to boot!

In addition to the aforementioned Armani and Vuitton, the highly technical outerwear at 1017 Alyx 9SM and Hermès were crafted in the style of contemporary skiwear. Think Arc’teryx but handcrafted.

All in all, this paints a picture of a 2024 winter with plenty of skiing – and après-ski fun.

Marc Richardson is a writer and photographer from Montreal. Her work focuses on fashion, culture and the intersection between the two. He has spent the better part of the last decade observing and cataloging menswear from New York and London to Florence and Paris. You can follow him on Twitter @quicklongread and Instagram @shooting.people.