Welcome, Earthlings, to Multiver-City One, our weekly column “2000 AD”! Every Wednesday we take a look at the latest Tharg and droid offerings at Rebellion/2000 AD, the galaxy’s leading Thrill-Power entertainment producers. Let’s get straight to the point! 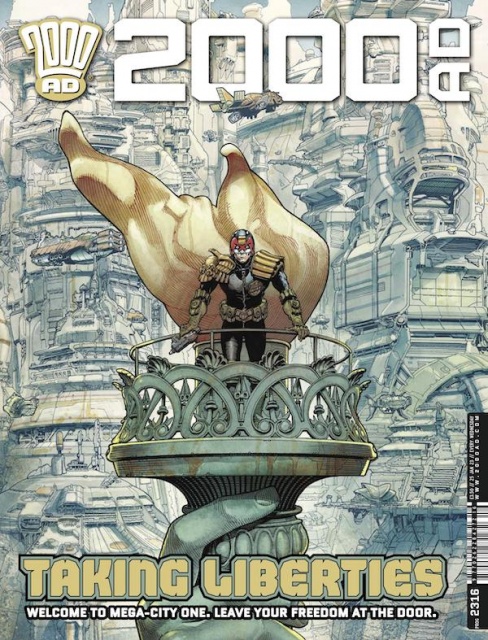 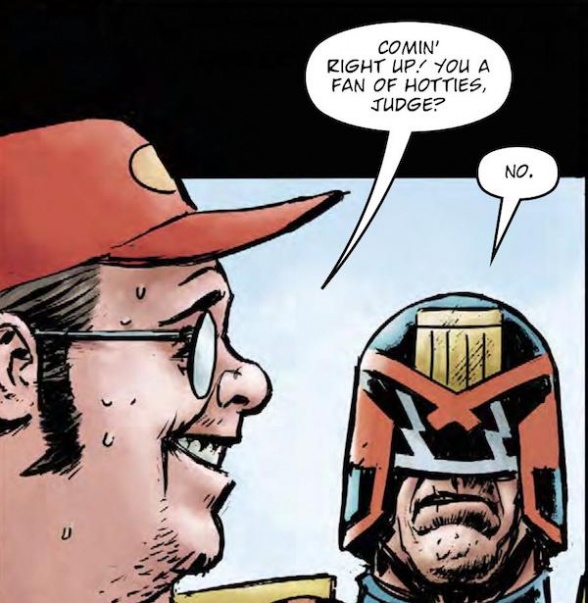 Greg Lincoln: “The Night Shifter” is ultimately the tragedy announced at the beginning. Luna Aguerra was doomed from the night she recognized the hottie cook despite her changed appearance. While it’s probably not the exact ending anyone had planned for her, the story is certainly one of the typical ranges of sad SVU Law and Order endings. Nicolo Assirelli’s art brings the impact of storytelling through its rhythm and skillful use of facial expressions. Even on the run, the suspect, Frank, looks utterly sleazy, detestable, and overconfident, even without his dialogue. There is an image of Luna from the first page that really pops. She seems fearful with just a hint of hope as she is given the opportunity to break out of her confinement. It is the face that prefigures the last panel. Assirelli’s faces have their full effect; even the people in the crowd scene when the zoom stops have their momentary impact on how we see history.

The choice to keep the majority of the judges anonymous except for Dredd and whoever takes a bullet from Frank makes a real impression. They may rule the roost, but their attitude and body language tell the difference between them and Dredd. They are faceless officials in the Department of Justice machine. Even if they hunt the missing Luna, it’s superficial and self-evident. In the sequence of panels that follow them to find his body, Dredd methodically and mechanically takes down Frank. The scene lacks catharsis, and Peter Doherty’s use of color and Assirelli’s choice of angle make that a fact. Dredd’s narration is equally brutal and disconcerting. Each panel highlights the damage it inflicts down to the broken jaw. There’s a bit of emotion in it, but the impact seems saved for the final panel, where the medical judges arrive to tend to the body. The law is served, the culprit is punished and all is well, but it is not right. Luna feels lost, forgotten and traumatized. The law could not protect her, and perhaps it could never save her from the trauma of her past. 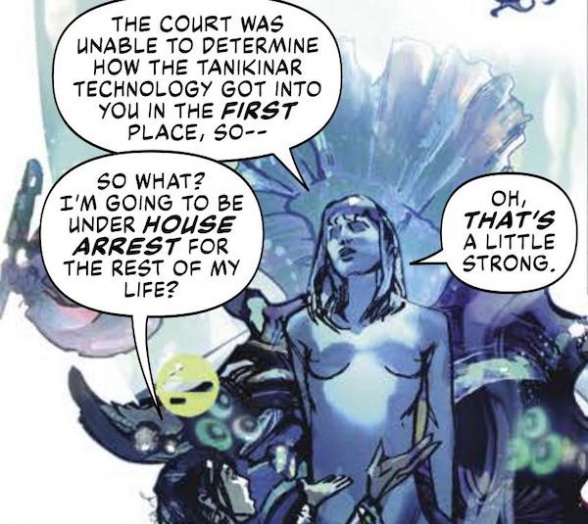 Brian Salvatore: One of the things “The Out” has been great at doing so far is building up tension and releasing it in unexpected ways. With Cyd on “trial”, the results seemed clear: innocent and freed or guilty and locked up/executed. But she was found “not guilty,” which is less than guilty, but not quite not guilty. Essentially, it’s determined that she had no control over her actions, but she must be kept locked away forever, just in case. Dan Abnett’s script lays it all out in a way that feels unexpected one minute, then totally logical the next.

This isolation, of course, drives Cyd crazy and is borderline “worse than death” for her. Mark Harrison does a great job of expressing his boredom through both a layout that has cleverly laid out Scrabble tiles and a slew of wonderfully effective Cyd Decisions. She has a post-it on her face, she has stopped wearing tops, she has a little round belly. After a first half of the strip in which reigns chaos, the back half looks like a hangover. It’s a masterful thing.

Matthew Blair: What do you do when you’re stuck, millions of miles away from any form of help, and stuck with a rather annoying companion? Well, a human would probably go hopelessly insane, but when you’re a robot with a power source that should last ages and the processing power to contemplate the past and your own emotions, you’d probably go very introspective.

So what happens when a robot built for war and assassination becomes pensive? Let’s find out.

“Joe Pinapples Tin Man 05” is surprisingly emotional writing by creator Pat Mills and shows a killer robot developing quite the psychological profile. Much of the story shows Pineapples missing his friends and co-workers, which is probably going to be a fun little reminder to anyone who’s invested more time than me in these characters, and it shows the same killer robot demonstrating a fear of his own death. There’s also a brief mention of a cross-dressing phase that Pineapples doesn’t want to talk about. However, there’s a bit at the end (which won’t be spoiled here) where we see the robot doing some work that will lead to future stories, and it does a great job of re-engaging the reader and keeping the momentum going. of the ongoing story.

One of the calling cards of Simon Beasley’s work in “Joe Pineapples Tin Man 05” has been the absolute layout of the panels and the fact that it can sometimes be difficult to understand what is going on. However, someone must have told Beasley about it as this section of the story is easy to read and much more traditional in its presentation. We get the best of both worlds here with fantastic character design that makes the story special and fun to read, but everything is designed and presented in a way that helps the story and emphasizes clarity rather than on experimentation.

“Joe Pineapples Tin Man 05” shows a robot with a surprising amount of emotional depth, even if that depth is presented in a somewhat humorous way, and leads rather nicely into the mystery of how this robot got there in the first place. It will be interesting to see how a soulless assassin achieved this moment of emotional clarity in future progs. 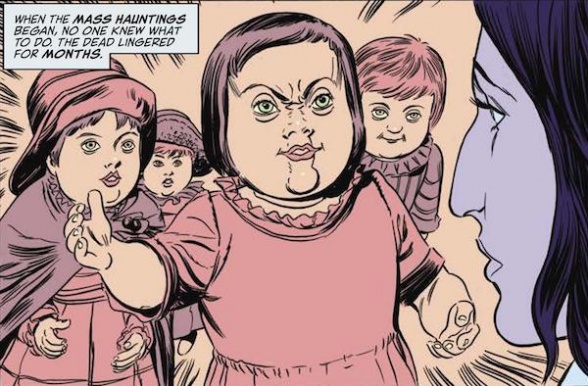 Chris Egan: This week’s “Terror Tales” is a classic story of a lonely exorcist who rents a house to empty it, the house is haunted from wall to wall in ways they never even imagined. In a dark and funny story, this supernatural investigator/exorcist, Mara, briefly takes up residence in the house and is almost immediately bombarded with haunted dolls, the ghost of an old woman, molten zombified trappings, and more. It’s an extremely wild short story and left a pretty, uneasy smile on my face through its four pages. Honor Vincent writes a smart, scary little story with Steve Yeowell’s clean illustrations with a perfectly muted palette that leaves you somewhere between a health and safety brochure and the artwork of John Higgins. Highly recommended for fans of “Tales From the Crypt” or horror show. 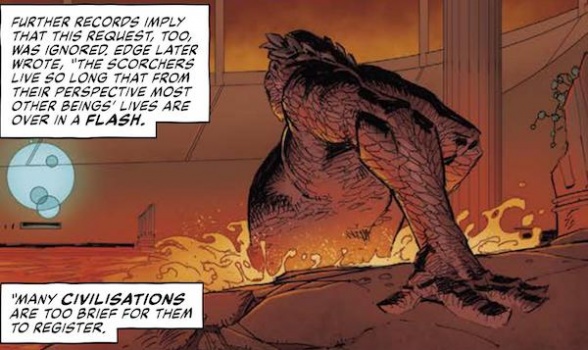 Michel Mazzzacane: “Vex” takes a slight shift in perspective and goes for the best in this episode. I felt a certain distance with “Proteus Vex”, maybe it’s the narrative framework around it that merges the future and the past together. It may be a great Jake Lynch art style but maybe a little too European for my taste. Everything is just very constructed, and the band recognizes this contracture. Which just makes it all stronger! The fifth entry in “Crawl Space,” however, takes that distance and places it in a more understandable storyline: a conversation.

Tsellest, the leader of the Scorchers, is incredibly old. So do Viridian Silk, two rulers of galactic empires with a sense of time beyond the imagination of so-called “lesser” species. Mike Carroll and Jake Lynch take these alien, abstract concepts and put them into a more understandable form—a conference between two beings who may not be friends, but who at least consider each other colleagues on an equal footing. They are aristocrats dressed in pageantry for all their alien creations. Their petty arrogance towards each other and everything around them is immediately understandable. Unlike some of the styles from previous bands, this immediately conveys their personalities and functions.

This being a conversational, intergalactic zoom, there isn’t much room for evocative movement. Lunch does a solid job with Tsellest, but he’s a bit like an impression of Darkseid – which could also be me reading more than anything. To spice things up, Lynch instead layers some of the massive concepts and ideas they talk about, turning the talking heads into frames for the page as a whole. We get an action page, an alternate view of Midnight Shame’s chimerical path through the galaxy. While it may not be the most exciting tape in the series, the construction and formal arrangement of everything is probably the strongest of the lot.